Last night, I achieved 5,001 hand signatures on the #AStarForCarrie petition. The number 5,001 feels so powerful, so representative of the insane dedication I’ve sunk into this project, and I have so much more work to do. 5,000 was a personal goal I set for myself by 10/29/19. I ended up two days past deadline, so I stayed out on Hollywood Boulevard cosplaying Princess Leia amidst a sea of costumed strangers on Holloween just to get that number. The very marrow in my bones feels exhausted, but I got there, dammit! Next goal? Let’s say 10,000 by the 12/19/19, the release date of Star Wars: The Rise of Skywalker.

Do you want to know the crazy part? The Hollywood Chamber of Commerce has a “no petitions” policy for awarding stars on the Walk of Fame. I told Ana Martinez, the producer of the Walk of Fame, I’m going to keep petitioning anyway. The HCC installs public monuments on a public sidewalk without involving the opinion of the public. That policy is un-American and spits in the face of the first amendment. I feel a duty as a citizen to continue petitioning until these issues are projected into the public sphere and the HCC considers a change of policy. I’m from Virginia, we take our public monuments very seriously. All the confederate generals can get melted down for inner-city playground equipment as far as I’m concerned, but the stars on the Walk of Fame are representative of the artists who shape our lives. Those are my people, my tribe, and the fans who stop to take pictures with them know the value of this honor. I doubt anyone at the Hollywood Chamber of Commerce is aware of the power these stars hold in our collective consciousness.

Method acting as Carrie Fisher/Princess Leia while petitioning for #AStarForCarrie has imbued me with a confidence I’ve never known. In part, this project is exposure therapy for my severe social anxiety. I’m always afraid people don’t want to talk to me. Almost everyone wants to talk to Princess Leia. I’m selling my ideas on an individual basis, endangering my safety by being a lone woman in a costume, exposing myself to microbes and wildfire ash galore, all because I believe in this cause. I continue collecting signatures afraid that Carrie Fisher will get a star after five years anyway and my efforts will go un-acknowledged. Fear is the path to the dark side. I told countless little kids “When Princess Leia gets her star, you get to say you helped!” Even if I never get credit for Carrie’s star, those children will see her star as a symbol of their first participation in democracy. Those are the lives I’m honored to have changed.

Carrie Fisher changed millions of lives without taking credit by working as a script doctor: 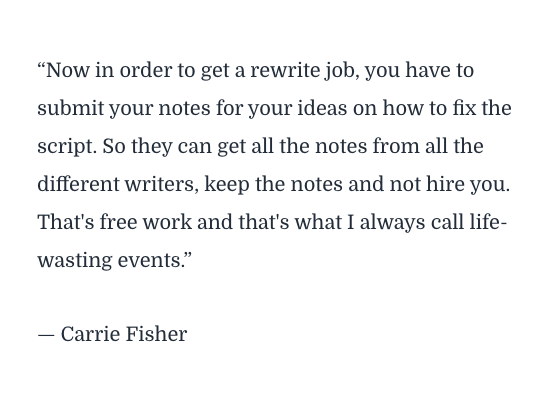 You won’t see Carrie Fisher’s name in the credits of any film she helped write. I sensed this may have been due to some deep, undue shame over being everyone’s favorite space princess and not wanting to distract from the content of films like Last Action Hero. It’s actually quite common for famous names to consult uncredited. In the most feminist coffers of my heart, I still feel the pangs of sympathy for Carrie Fisher’s need to disassociate her own name from her writing. The same feeling arises for J.K. Rowling, whose first name is Joanne, by the way. The publishers of Harry Potter didn’t think boys wanted to read a book written by a woman. Turns out, everyone wanted to read Joanne’s writing. Even Stephen King, who suggests reading the Harry Potter series in his memoir, On Writing.

I am also a professional script consultant. Please check out my extensive writing samples. As part of the #AStarForCarrie project, I’m now offering my notes/script consultation for the ultra-affordable rate of $20/hour. This rate enables screenwriters and production companies of all economic levels to improve their work by utilizing my versatile imagination. In honor of Carrie Fisher’s prolific writing talent, I started the #OccupyFamilyGuy petition and Fortunate Son screenwriting project. The next step in this journey is to carry on Carrie’s legacy of crafting extraordinary scripts.

Hire me with or without credit. This project doesn’t exist to serve my name, it’s about making systematic changes by inserting women’s voices in media. I have been a writer since before I knew the alphabet, imagining fantastical and captivating stories since I could talk. Seeing my imprint on the big screen (or small screen, any screen, whaddya got?) would be one of the ultimate triumphs of the #AStarForCarrie project, second only to installing a symbol of equality Hollywood needs, a star on the Walk of Fame bearing the name Carrie Fisher. My name isn’t as important as the impact she left on our culture.

Got a script, treatment, or story idea that needs a touch-up? Buy my imagination for $20/hour, as part of the #AStarForCarrie Project! Please email consultation inquiries to imaginationforsaleceo@gmail.com.

*Update! I’m offering five hours of script consultation for $20/hour, per script, as part of the #AStarForCarrie project. Anyone with a script (or an idea) and $100 is welcome to sample my imagination. Further consultation at a later negotiated rate is available.