In the 1960’s, counter-culture political activist Abby Hoffman wrote a book titled “Steal This Book”, which was full of ideas about and practical tips for living outside of the capitalist system as much as humanly possible by stealing. The book’s very title commands it. Hoffman suggests that corporate globalization will consume us all if we don’t fight back by shoplifting their bottom line. A lot of stores would refuse to carry the book because they couldn’t make any money off of it. That brick of irony could choke a donkey.

Artist Yoko Ono once performed a piece titled “The Artist is Present”, where she sat in a chair, staring blankly ahead, while a line of people took turns cutting off pieces of her clothing with scissors. This stark, minimalist statement declares the exact process by which artists are forced to sell their art. Take pieces of what I choose to protect myself from your eyes and hands judging my nakedness. Ms. Ono is on a level we can’t even see. So much more than that guy she married.

Yesterday, I was in court for the third time, for a misdemeanor trespassing charge. I have to go back to LAX courthouse (a 90-minute bus ride from West Hollywood) on October 29th. It turns out Kevin, the security guard who had me arrested, has a criminal charge for grand theft and was assigned the same public defender as me. So, now I have a new public defender and even firmer resolve to keep petitioning for #AStarForCarrie and #OccupyFamilyGuy. If I give up on either of these causes, it’s like I went to jail for nothing. Someone tell Jane Fonda it’s not fun going to jail if you don’t have the money to get out. Climate change is a valid cause to lend her recognizable name to, but it’s white privilege that allows her to get arrested on purpose every week.

Before my case was heard, I sat through five black homeless men being brought into the courtroom, chains around their waists, ankles, and wrists. The last prisoner was unwell enough to be sent to a mental healthcare facility. The others were not so lucky, although it was obvious to the untrained eye, they needed help, not jail. White guilt filled my heart every time they brought another black man in the courtroom. My causes felt stupid, unimportant, and privilege-blind. Black people get murdered by cops all the time and here I am standing up for a dead space princess. Even facing their bleak, traumatized stares, I knew I still had to stand up for myself. Maybe I’m wrong, but it feels like there’s no point in acknowledging white privilege if I don’t utilize it to make systematic changes for everyone.

I can’t judge Kevin for stealing. I’m appropriating an iconic character for #AStarForCarrie in the name of a woman I never got to meet. I’m stealing the image of Princess Leia in order to shed light on industry-wide gender inequity, create a positive social movement, and install a symbol of equality on the sidewalk in Hollywood. I don’t know what Kevin allegedly stole or why (if there is a reason) he ended up with the same public defender as me. All I know is now we’re in the same boat and our capitalist criminal justice system is kind to no one poor enough to need a public defender. The most hopeful part of me that started this project back in May must extend as much sympathy I can spare, but I was in jail for three days for tweeting on a sidewalk. Go fuck yourself, Kevin.

While walking home from therapy today, I heard a stylish young black man explaining the plot of “It’s a Wonderful Life” to his girlfriend, sitting at a sidewalk cafe, sipping a CBD latte. “…And because Jimmy Stewart helped all these people, they helped him out in the end…” I thought, not only did that dude seem smart and hardworking, statistically, he had to have been lucky too. That sad truth lingered on my mind for the rest of my walk home. Everyone hopes to be as beloved as George Bailey, but not all of us are born with the luck of a white man or such a begrudging sense of obligation. If there’s no joy in how we help our species evolve, it’s easy to get to the desperate point of suicide contemplation. Art makes us want to survive.

I repeat the #AStarForCarrie nonprofit pitch over a hundred times in the average petitioning shift. “Cosplayers petitioning for women’s rights issues” isn’t something that’s been done before, as far as I’m aware. Imagine if those folks with tablets outside of Trader Joe’s were wearing costumes? Would you be more likely to talk to them? Perhaps walk away feeling better, more joyful? I want other people to experience the overwhelming joy that can come from providing participation in the democratic process while embodying a character everyone loves. I’ve worked with two other women, petitioning as a team for #AStarForCarrie, but I’m still learning how to manage myself, let alone another person. Why should that keep any fan from taking these causes upon themselves? I don’t think it’s fair to limit this movement to what I can handle (not much).

So, #StealThisMovement. That’s right, I am asking people to steal my idea. Take #AStarForCarrie and make it your own. Go to a thrift store, find a white dress, twist your hair into buns, print out petition forms (libraries offer cheap printing), get a clipboard/pens from the dollar store, and get some ink on paper. Boom, you’re Princess Leia! My sign is still mostly handmade of marker on poster board/paper taped to a broomstick. Steal my design. 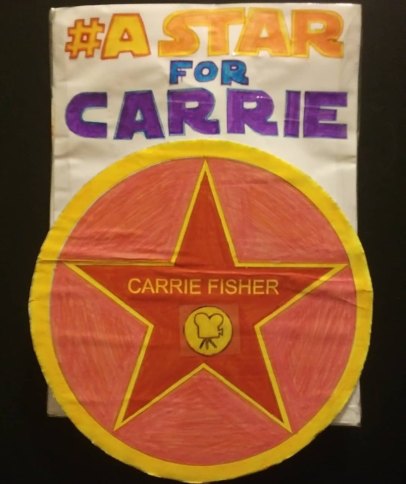 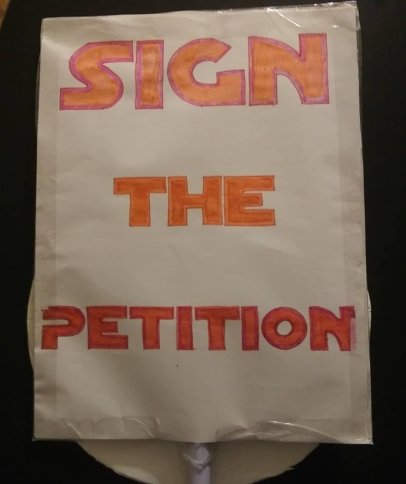 Anyone of any race or gender is allowed to participate in #AStarForCarrie cosplay petitioning because this is America and I say it’s cool. I’ve petitioned all over the LA area, but I believe this method can work anywhere. To be added to the official petition tally, email pictures of completed petition forms to me (imaginationforsaleceo@gmail.com). I’ll send them to the Walk of Fame and the producers of Family Guy.

The more petition forms they receive, the more difficult it is for the Hollywood Chamber of Commerce to deny they are an institution that installs monuments on a public sidewalk without involving the opinion of the public. Remember to ask petition signers to share #AStarForCarrie pictures on their social media pages to get the word out. Petition for free if you have the spare time, or ask for donations, which you may contribute to my project or keep. What’s stopping you? Go for it! Be safe, use hand sanitizer, work in teams, don’t get arrested, and remember the Force is with you.

I’ll say it again, a star on the Walk of Fame is more valuable to the fans than the artist whose name it bears. What kind of egotistical celebrity would re-visit their own star? Hang out by Michael Jackson’s star for a while and you’ll see several dozen fans taking heartbreaking selfies with this physical embodiment of his life. You will see very different reactions at Trump’s star. At ComicCon over the weekend, I met the creator of the “your name here” fake Carrie Fisher star, which generated a fan-made shrine for weeks after she died. The way he talked about her, it was like he had lost a member of his family. The artists we love are part of our extended family, whether they realize it or not.

The Hollywood Walk of Fame is a place to celebrate the work of artists who shape our lives and grieve our fallen icons outside of sacred grounds. As of today, the #AStarForCarrie petition has 4,249 hand signatures. #StealThisMovement so we can grow that number exponentially.

Please email me with any questions/tips about furthering the #AStarForCarrie movement. If you live in the Hollywood area and want to petition with me, let me know! Contact